You will be astonished to know that a giraffe’s skin spots are similar to a human’s fingerprint. Tow individual giraffes don’t have identical patterns. There are 4 types of giraffe we are popular with. Do you know the only heart a giraffe has is 2 feet long, with 24 pounds of weight on average? The Southern giraffe is also known as the double-horned giraffe for its two beautiful horn on the head.

Southern Giraffe with its scientific name Giraffa giraffa, is a typical mammal species native to South Africa. However, the IUCN currently recognizes only one species of giraffe with nine subspecies.

Entire South Africa is the home of the southern giraffe. In the Savanah and safari in South Africa, Angola, Namibia, Botswana, Zambia, Swaziland, Zimbabwe, Mozambique, these species are positively habituated.

Giraffe is a calm, silent, and cool animal. It is very uncommon to see them aggressive.

They graze all day long in their territory in search of food.

Since the giraffes find it challenging to sit down, it spends most of its life standing up. They even sleep as well as give birth standing up.

The giraffe most of the time take rest in a standing position since they have difficulty to seat down because of long leg and neck.

The giraffe does not sleep for long, rather they depend on short naps most of the time when they need rest or refreshment. A Southern Giraffe sleeps only up to 5 to 30 minutes a day.

They love to graze in the group. The giraffe has its own group and doesn’t mess up with other groups.

Many are furious and aggressive in order to keep the territory with any other giraffe. Also, they are very loud in the mouth of the predators.

They have along with their tongue in order to pull the leaves close to their mouth.

Giraffes are herbivores, vegetarians. They feed on leaves, flowers, fruits, and wood tree trunks. Hibiscus, a variety of lilies, and Colombia are found in the flowers and shrubs in the natural habitat, but the giraffes prefer the babula, an extensive breed of thorny shrubs and shrubs that grow in Africa and Australia.

In addition to the underlying nutrients, the leaves of these plant of plants provide them with plenty of water, which is why they spend a lot of time without drinking.

They devote most of their day to feeding as they chew gently and to avoid any harm to the organism, they must cover large spines of food with saliva.

Life in a zoo is after that life in the wild. In captivity in the zoo, cookies are usually their food, with tiger fresh leaves, straw, stems, carrots, and high fiber content.

Like all species, the southern giraffes are also flammable, and there are four chambers or bogs in the stomach that help with the process of regeneration and digestion.

Its habitat is composed of a variety of plants, including savannas, shrubs, and forests.

Botswana is a semi-arid country with warm summers and dry season winds continue from south April to October, and temperatures only north in November.

Zimbabwe, a significant number of places in the southern giraffe, represents many differences between its warm and dry climate.

The monsoon and drought recover from the end of October to March. 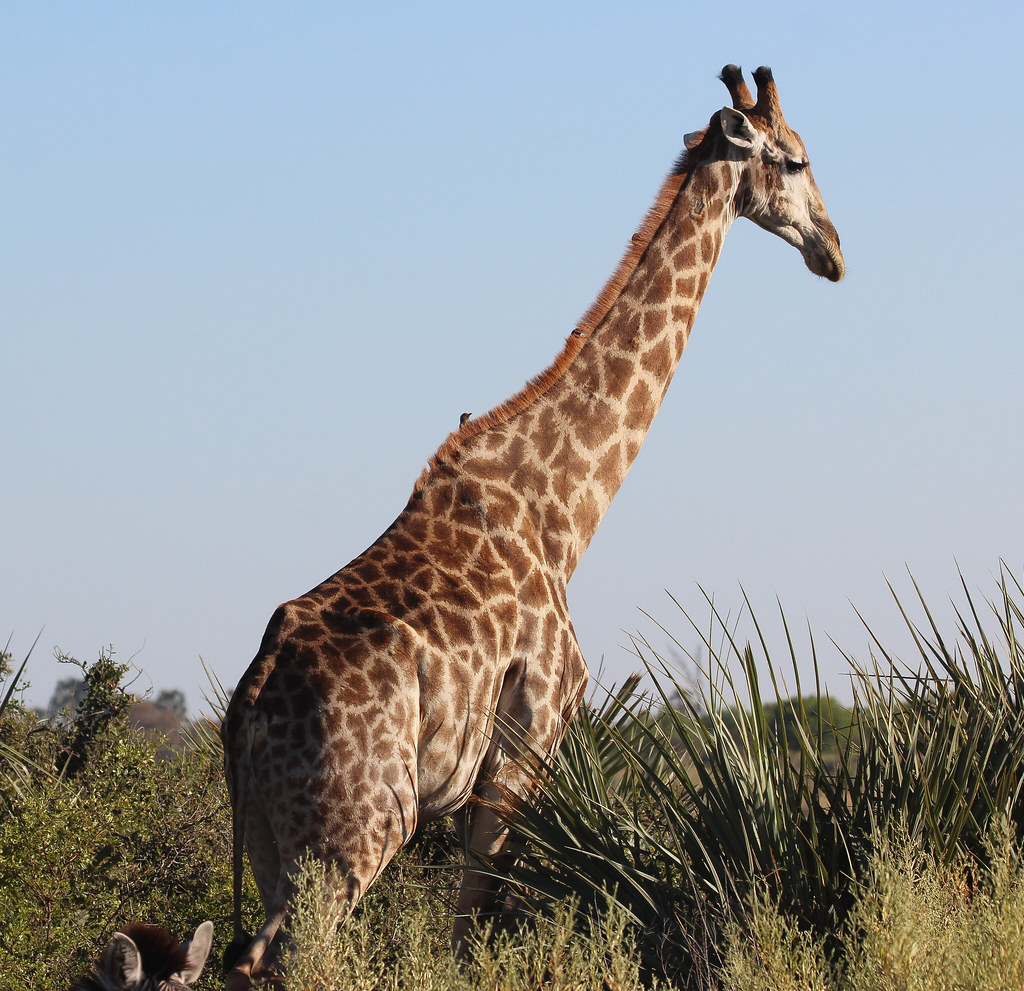 They have a small but prolonged hitch on the back. Each of the necks is made up of seven spines, each about 8-10 inches.

The female southern giraffe is 0.7 to 1 m shorter in size than the male counterpart.

During the birth, the calf is 2 m long, with a weight of 50-55 kg with appropriately feed.

They have unique and strange horns called ossicones, which are shorter and hair much longer than men, as part of the sexual slapstick trait of each sex.

The spotted coat is available in both males and females.

The coat color changes according to the habitat as an adaptation.

The pattern of the skin the giraffe has during birth lasts permanently till death.

However, the coat color changes with the transition of season, temperature, health, and food.

Southern giraffes have rounded or stained spots, some of the stains have run under the straw with star-like extensions in the background of a light tan.

Generally, the southern giraffe has dark patches, is round and irregular in a reddish-brown color. Unlike other species that have color pale feet, these giraffe scars cover all the organs, though they become smaller as they approach the feet.

A Southern giraffe bellows, snorts, hisses, and makes flute-like sounds, as well as low pitch noises and the sounds are out of the range of human hearing in most of the cases. These sounds are part of their communication.

The southern giraffe lives between 20 to 27 years in captivity. The lifetime in the wild is less than that, only 10 to 15 years because of the predation and other challenges.

These are used to fight with the competitors in the case of males, whereas working as an ornament for females.

The size of the male is bigger. They fight for dominance and win over other males to achieve success to mate and reproduction.

Their encounter is called neck-to-neck “necking” which is a competition to decide who will inherit mating.

They measure girls’ sexual acceptance through the smell and testing of urine, determining who will be a better sexual partner.

The female has a gestation of 15 months. Most of the calves are born in dry months, and in some territory, babies are born in any month of the year.

The youngsters are about 1.70 meters at birth and walk within hours knowing their new abode.

During birth, the baby falls from 6 feet high on the ground. Mothers are very protective of their offspring and generally maintain a strong bond until later in life.

Women get maturity at an average age of four years, while men do this when they are more than five years old.

Males do not have the opportunity to mate until they are seven, in order to gain adequate strength and size to fight and win over other peers.

Southern giraffes are not being threatened because their population is growing. Lions, leopards, cheetah, wild dogs, and hyenas are some of the fierce predators of the giraffe.

Compared to the age, the juveniles and kids are more vulnerable to prey. It is told that 75% of babies are killed by predators before they complete the first year of life.